The Blues’ academy system is by far the best in England but when will we see that conveyor belt of talent make its way into the first team?

Chelsea stretched their remarkable run of FA Youth Cup triumphs to four in a row at Stamford Bridge on Wednesday, but the question on everyone’s lips is when will we see some of these players given a chance in the first team? 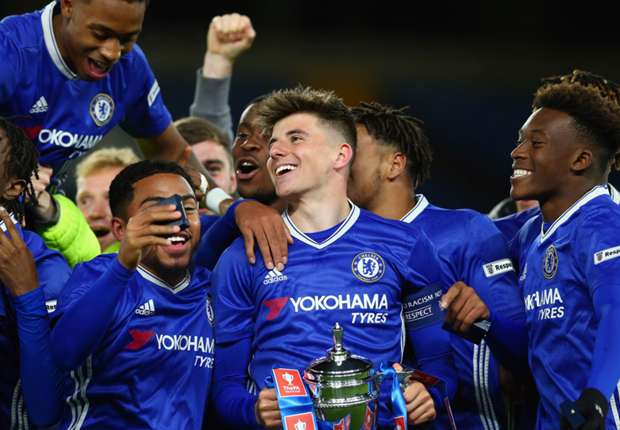 The young Blues reasserted their status as the best academy in the country with a 6-2 aggregate victory over Manchester City.

City were well beaten thanks to goals from Trevoh Chalobah, Ike Ugbo, Callum Hudson-Odoi, Dujon Sterling and Cole Dasilva. Antonio Conte was in attendance, sat alongside Roman Abramovich, but despite his smiles and applause, he won’t yet be ready to promote any of his youngsters into the senior fold

Mason Mount lifted the trophy as the Chelsea Under-18s captain and said that the first team boss’ presence helped his team to victory: “[Conte attending] gives us all confidence.”

Should Mount and company be confident about their future at Chelsea, though? A look at previous FA Youth Cup-winning captains tells some of the story. Ruben Loftus-Cheek and Nathaniel Chalobah led their respective sides to glory but are largely on the first team bench. 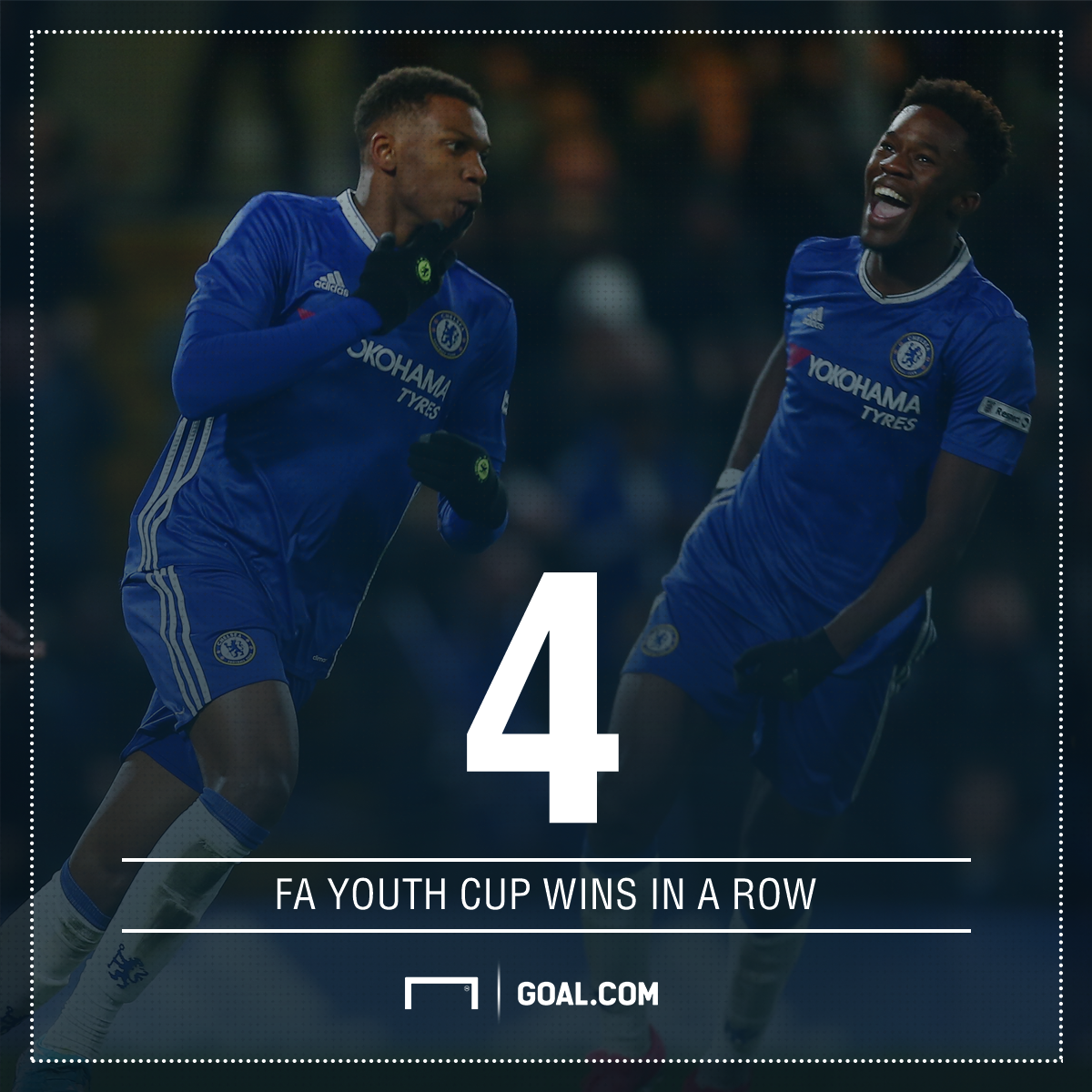 They are the two most successful players to have captained the youth team, while Jake Clarke-Salter and Charlie Colkett are on loan in League One. They are the most recent players to captain Chelsea’s youngsters and may yet go on to greater glory in the future.

Conor Clifford lifted the trophy in 2010 and he has ended up at Dundalk in the Irish first division and while a career in professional football is almost guarenteed for the dominant academy players in England, making it at the top with Chelsea is much more complicated.

However, the final step to the first team is the trickiest one to make. Mount will compete with the likes of Eden Hazard, Willian, Pedro and Loftus-Cheek for a spot in Chelsea’s first team in coming seasons. 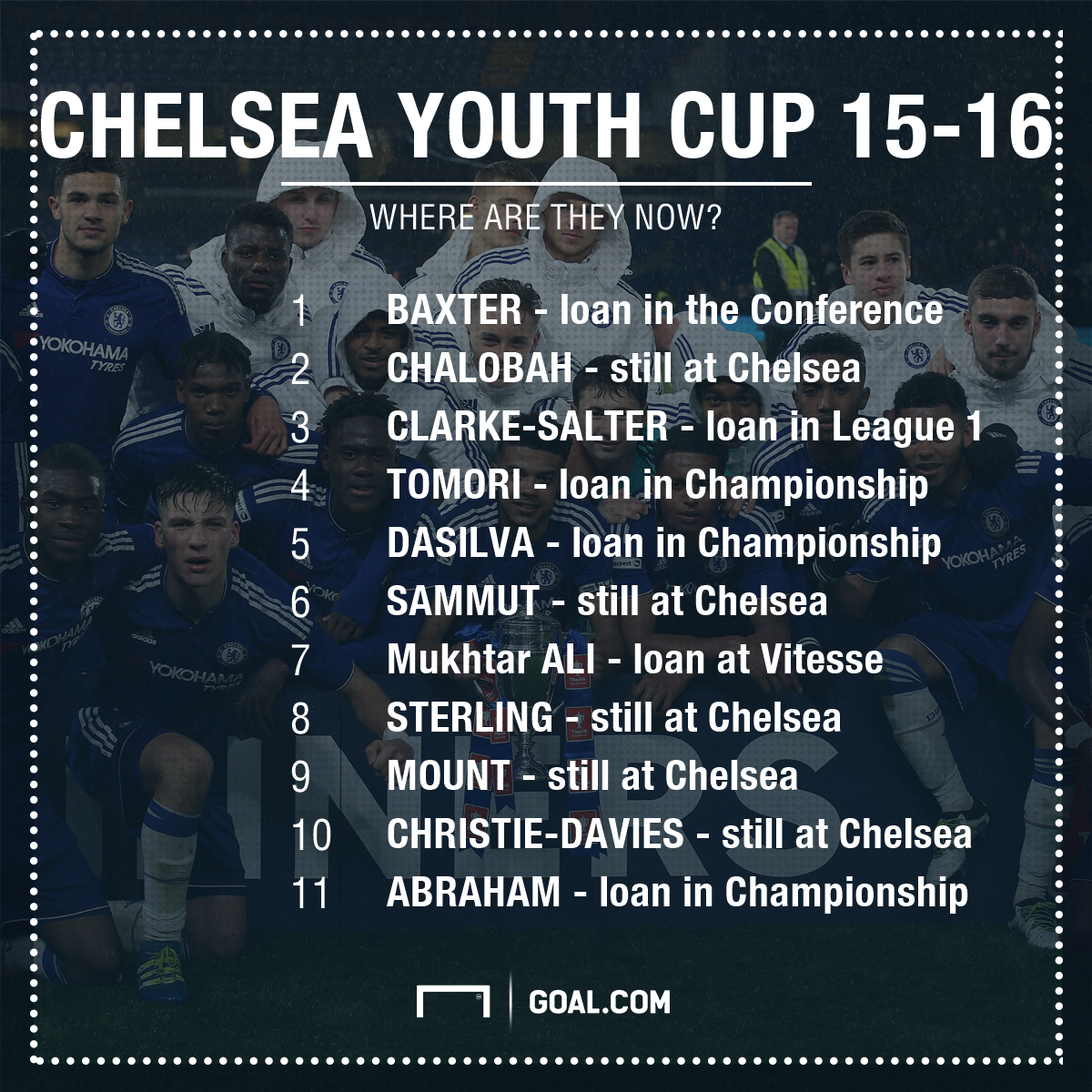 Ake and Christensen will likely be in Chelsea’s first team next season and Trevoh may need to take the same path as his brother Nathaniel – go out on loan. He might even need to do it for more than one season.

Very few players are capable of doing what John Terry did 15 years ago and step into the first team and not make mistakes. Chelsea have zero tolerance on mistakes and winning has become everything in the first team.

The jokes will be made that Chelsea’s Dutch feeder club, Vitesse Arnhem, will be watching the youth cup games closely but the teenagers must aim to spend that time away at as high a level as possible.

Even Terry needed a loan move and went to Nottingham Forest for six appearances that helped to turn him from a boy into a man, away from the warmth of his parents and youth football.

It is almost unthinkable that Conte would take a chance on Under-18s players between now and the end of the season, with players like Loftus-Cheek and Ake, who are in their early 20s, still struggling for a chance to impress. 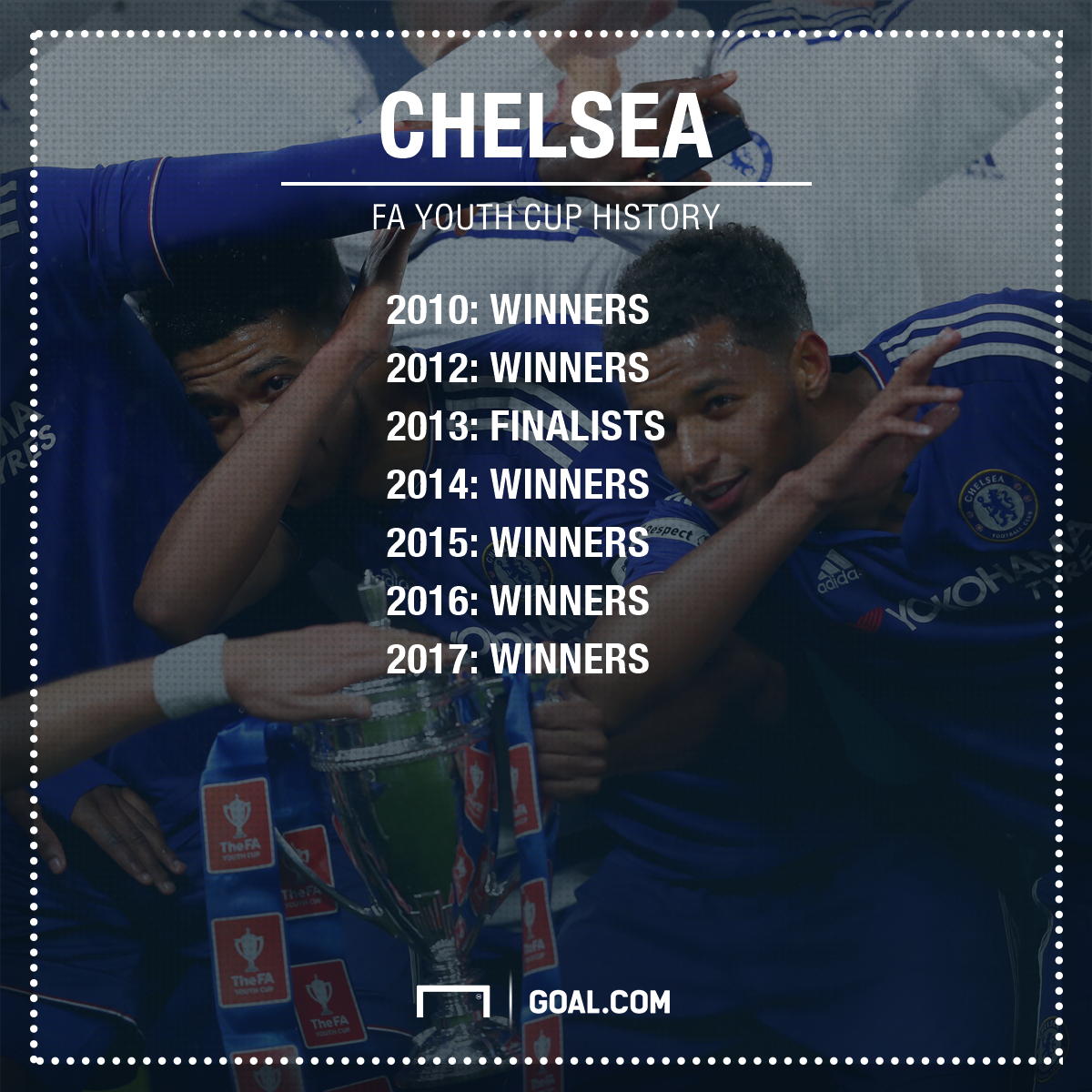 Tammy Abraham is currently showing what’s required for a teenager to get your manager’s attention in a loan stint at Bristol City, only a year after winning the FA Youth Cup.

Bristol City are an average side but Abraham has become the youngest player for over 20 years to reach 15 goals in the Championship. He is currently on 23 goals and aiming to hit more in his final two games of the season. He is expected to return in the near future but Abraham is realistic and knows that leaving Chelsea might do him some good.

Many of Chelsea’s FA Youth Cup winners will never beat the likes of N’Golo Kante and Hazard to a first team place, so they have to be ruthless and entertain every option to move that comes their way.

Loan deals are vital opportunities for Chelsea’s youth to impress in the man’s game. Borussia Mönchengladbach are desperate to keep Chelsea’s Christiansen permanently – while bigger clubs like Barcelona are thought to have also noticed his talents.

But what’s in it for Chelsea? If they ultimately sell Abraham, it will be for a huge profit and go some way to paying off the costs accrued by their academy. Chelsea’s football production line is what they do to compete with Manchester United, who earn bigger revenues thanks in-part to a bigger stadium, this gives them an advantage thanks to UEFA’s Financial Fair Play Regulations. 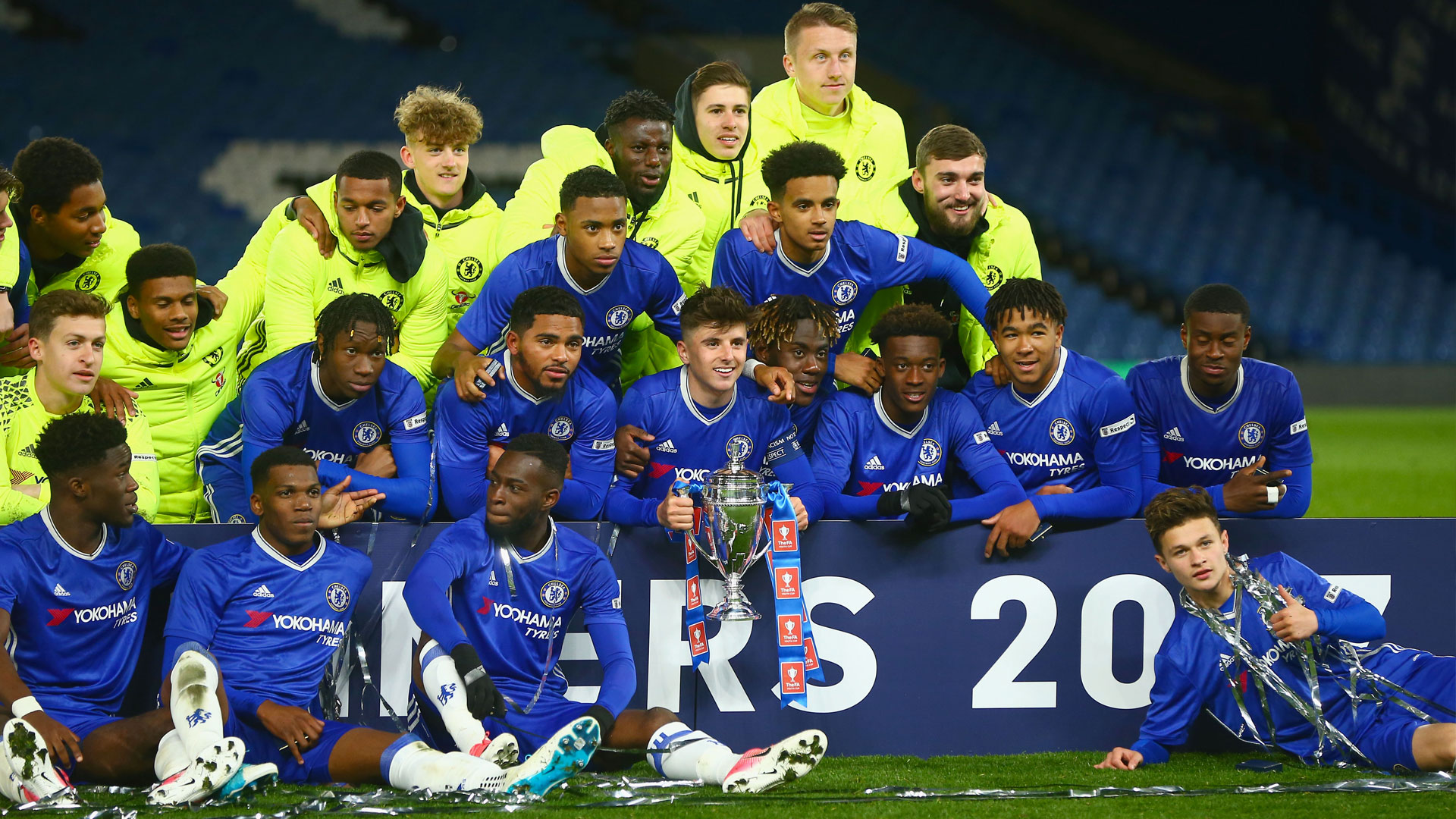 Some worry that Chelsea are stockpiling talent with their dominant academy and over 30 players out on loan, but Man City have imitated the model and it is looking like others will follow.

Chelsea seem to be ahead of City at present, though, and have only one record to target before becoming the greatest youth set up in English football history – the one of Manchester United’s Busby Babes, who won five FA Youth Cups in a row in the 1950s.

Arsenal have been overtaken as Chelsea won their eighth FA Youth Cup to go second in the competition’s history. They need two more to match United’s total of 10.

Many Chelsea fans want to see these guys get their chance but football has changed and all major clubs are increasingly risk averse. The days are long gone where an academy team like United’s wins the Champions League, formerly the European Cup. Marcus Rashford only got his chance because of an injury crisis at United and if he didn’t keep scoring from the beginning, he would have been quickly discarded.

FA Youth Cup success may only help to get the youngsters loan moves six months later. Eventually Mount may return from a loan spell at a couple of clubs, as the world of elite football becomes a place for players in their early twenties, but patience is everything for the young champions looking for their first taste of the spotlight.

EPL: Man Utd get major boost ahead of Arsenal clash

I learnt a lot this season